The Dutch authority responsible for vehicle registrations, RDW, is known by its innovative approaches. They were one of the first registration authorities publishing the complete non-sensitive licenseplate registration database as open data via http://opendata.rdw.nl. Earlier this year RDW extended their amount of published datasets with a lot of european type approval data. Kenteken.TV was the very first to publish about this new dataset, but waited for something bigger: making news out of it for new models not mentioned on the news sites yet. It looks like this mission has been accomplished with this news fact: Tesla has received official type approval for P100D version for Model S and Model X!

NOTE: Normally this blog publishes postings in Dutch, but this posting might get some coverage internationally. For that reason English is used.

Car manufacturers need to approve their vehicles to be sold in the European Union. The manufacturers is able to choose their own approving company within the EU. Once an approval for whole vehicle is issued, the manufacturer can produce the vehicle in line. The details will be saved on the so-called Certificate of Conformity (CoC abbreviated). A vehicle consists of a lot of components. Each component has its own approval scheme as well.

RDW is appointed by Tesla Motors Inc. to perform Tesla’s type approval process for the whole vehicle. Due to this appointment RDW was involved in granting permission to Tesla for releasing Autopilot to European customers.

Optional there is also a Type registered. This field most of the times contains the model code of a certain model (think of E36 and so on from BMW)

10 = Extension of type approvals done for this manufacturer by approval authority. 00 was first, 01 second, etc.

Tesla is ramping up their portfolio recently with Model X. Model III has gained also a lot of traction in the press. Around these announcements on the Tesla forum and on the internet speculations were made about an upcoming upgrade for the Model S and Model X. In stead of the 90 kWh battery a new 100 kWh battery would come available. This new version should get the name P100D. Meanwhile officially Tesla is downplaying this new upgrade.

A hacker discovered in the firmware of Tesla a badge logo of this new not yet confirmed model:

This “hack” resulted in a tweet from Elon Musk (related to a forced downgrade of firmware of the hackers Tesla):

@wk057 @TeslaMotors Wasn't done at my request. Good hacking is a gift.

Today Kenteken.TV discovered another piece of the puzzle for this specific model. And this piece is coming from a very good source. In the type approval database of RDW can be found that Tesla is granted 78 type approvals on number e4*07/46*0667*10: 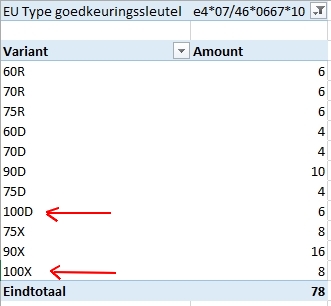 I was surprised to see 100D and 100X popping up in the list. 100X is linked to Model X and 100D to Model S. When comparing 100D with 90D in this database it is noticed that the power is the same (90 kW), while the distance range in kilometers is differing between the models:

I’m wondering when Tesla will officially announce this new option.

This story has got some worldwide coverage. First Dutch automotive newssite Autoblog.nl picked up the story. Soon international sites picked up the story: Reddit.com, Electrek.co, BGR.com, Yahoo.com, Teslarati.com, gas2.org, some Tesla or EV related forums and even a Chinese site.

With this update of the posting I made some small adjustments of the text as well: replaced engine by battery, highlighted 100D and 100X options in the screenshot as well as datatable and added tweet of Elon Musk regarding the earlier discovery of P100D badge.

Tesla Motors just announced via a press conference and announcement the official introduction of the 100 kWh upgrade, known as P100D. Unclear yet whether this announcement has been released earlier. 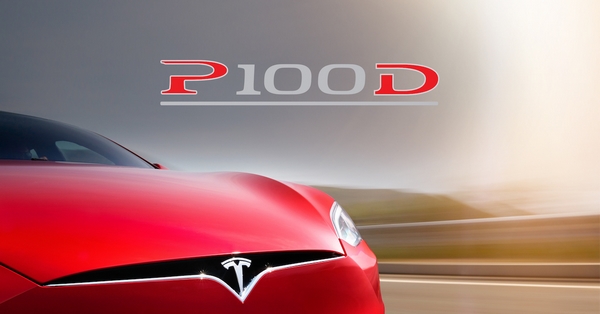 For Kenteken.TV this will be the end of an extraordinary rollercoaster ride. The scoop found was mentioned on more than hundred sites and hundreds of tweets. Maybe this made it interesting for a Chinese hacker to get into the core of this blog site to send out spam. This is fixed by now luckily.